…by which I (mostly) mean live stand-up comedy shows. I wrote recaps for a couple over at AST (which I'm re-posting below), but the first couple I didn't, so I've linked to reviews I found elsewhere.
Brian Posehn @ Cobb's (w/Chris Garcia & Ngaio Bealum) - April
Jay Pharaoh @ Cobb's (w/ Reggie Steele & Kris Tinkle) - July
Maria Bamford @ The Punch Line (w/ Nato Green & Robert Mac) - August
Louis C.K. @ The Punch Line - 8/18
Just got back from the Thursday night show and Louis was awesome. Hour and a half long set of new material. Working stuff out, some pauses and dead ends but he's such a pro it all comes out funny. I'm sure when it's tightened up he'll have a great set to record and show on TV and stuff, but it was cool just to see him be loose and goofy in front of a small crowd.

Just returned from NNF/RYT Live shows at the "legendary" Purple Onion in San Fran. My first time in this room and while it is quaint and charming it's also kind of a dump with numerous interruptions by a noisy bartender and staff, which of course Jimmy remarked upon several times. First show sold out, second a bit more "intimate" (i.e. two-thirds full).
The NNF show was recorded and I imagine will be offered up as a Bonus Episode soon. Guestless (which surprised me because I know Chris Hardwick was in town last night), the guys had some good stories involving Ann-Margret, preparing an apartment for Jimmy's mother, baby bottoms, cocaine (lots of cocaine… and cock), and another great, ultra-cruel, eBay letter from Pat.
RYT was fun with one female contestant being way too weird for Jimmy who offered her many opportunities to step off the stage and a guy named Jeremy who was more co-operative, and ultimately won the game ($31 and a truly bizarre Harry Caray Cubs t-shirt). The panelists were Cole Stratton (his first time – and MVP IMHO), Janet Varney, and "Pat Francisco." Not recorded, so suck it, the rest of you.
Special thanks to fellow podcast aficionado Derek and the great Christine Taylor who were cool enough to talk with me and give me the courage to meet Pat, Matt, and Jimmy after the show(s). They were all as nice and appreciative as you could imagine. Thanks for the great night. 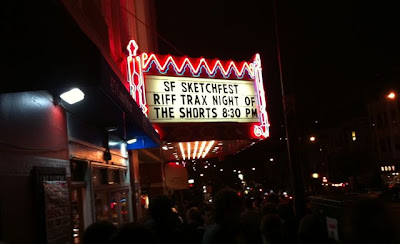 Rifftrax Presents - Night of the Shorts II: Electric Riffaloo @ The Castro Theater - 8/20
with Kevin Murphy, Bill Corbett and guest riffers Chris Hardwick, Bob Odenkirk, Andy Richter, Adam Savage, Cole Stratton and Janet Varney
As per usual for these shows I arrived to a long line of ticket holders that extended around the block. The show started 15 minutes late and by the time everyone was seated, the 1400 person capacity theater looked pretty full to me. After showing the Rifftrax 5 year anniversary highlight reel, Kevin & Bill took the stage … and the crowd went wild - (yay).
First they showed a brief video message from Mike Nelson explaining why he wasn't there  (he didn't come in January either - what's he got against SF?). Apparently while trying to sell RT titles door-to-door he was killed by an irate customer who didn't want to buy their take on "300." Then they outlined what we'd be seeing (they did this last time back in January which I am grateful for since it gave me a chance to jot down notes without missing any of the riffing).
1. County Fair - K&B, lots of singing
2. Act Your Age - w/ Chris Hardwick
3. Paper and I - w/ Bob Odenkirk
4. The Calendar: How to Use It - w/ Cole Stratton and Janet Varney
5. Flying Stewardess - just K&B
6. At Your Fingertips: Boxes - w/ Adam Savage
7. Tooth Truth with Harv and Marv - w/ Andy Richter
So two repeats from previous Fathom live shows (which I didn't mind) and five "new" ones, adding up to two-hours and overall an even better show than last time. They picked great guests and some truly surreal shorts. I don't know the studio versions of all these so I'm not certain how much of the riffing was new or tweaked by the guest riffers but it all felt fresh to my ears (there was a joke about actor Gerard Depardieu pissing himself that was ripped from today's headlines). They even threw in a few f-bombs and other expletives which delighted the crowd. Seriously, if you have a problem with CT & RT folks swearing at live shows you are a moron. 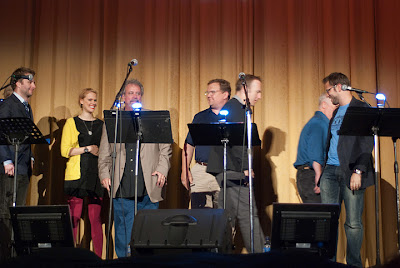 Just got back from Andy Kindler. As great as I'd hoped, he prowled the stage like an elderly Dane Cook after a hip replacement (Andy's joke, not mine). The audience seemed to really enjoy him, so don't let him tell you otherwise. Openers Miles K. and Jacob Sirof were really good too. I was the idiot who said that I was there alone because, "I didn't want to have to explain to my friends who Andy Kindler was," which confused Jacob (who was doing some fun crowd-work). After awkwardly trying to explain myself, he finally said, "Your friends are assholes."
Posted by Finnias Jones at 4:29 PM