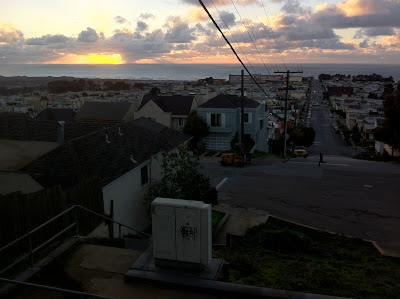 Nah, I ain't dead. Just a bit overwhelmed. Been keeping track of my consumption (the TRUE purpose of this blog) over the last 3 quarters. Some dates are lost to the ages. Opinions are scarce, but if you want I'll write a custom review for you. Categories are more mixed-up than ever, but bear with us. We made it through…

HBO - Boardwalk Empire Seasons 1 & 2 watched On Demand in two days (9/15-16) just in time for the premiere of Season 3 (which recently ended). Greatly enjoy it, but admit it might have peaked near the end of S2. Worth it for the sets and costuming alone. And any scene with Michael Shannon. Or Paz, or Gretchen… Newsroom - frustrated by the highs and lows of this Aaron Sorkin project. Brilliant political fantasy blended into a limp soap opera performed by a fine cast. Love to hate it. Much more consistently great have been Game of Thrones, Veep, and Girls. 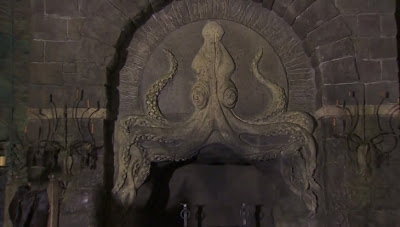 Brody Stevens: Enjoy It! @ HBOGO - 6 episode series documenting the ups and downs of an eccentric comic. Funny and troubling. Also really enjoyed The Ricky Gervais Show - Season 3 and caught up with a bunch of old episodes via HBOGO.

Totally Biased w/ W. Kamau Bell is good, as is Wilfred, The League, and of course Louie. All on FX.

8/05-8/09 The Golden Girls on HCHD - 8 episodes from 1989: 8 from end of season 4, last 4 of season 7 (finale), first 4 of season 1 (incl. pilot by Susan Harris). A running joke on The Todd Glass Show this year has been the guy who always talks about "The Golden Girls," dispensing trivia both true and untrue. After looking into the show I learned it was a well-respected and very popular show in it's time (1985-1992). So I watched a few from the beginning, middle, and end of it's run and was pleasantly surprised by how funny and charming it was. But 16 episodes will do me fine for a while.

Being on the Hallmark Channel for the first time in my life I saw promos for The Good Witch Marathon (starring Catherine Bell from JAG) which I ended up watching way too much of. Really watered down occultism and saccharine family drama. But somehow watchable… 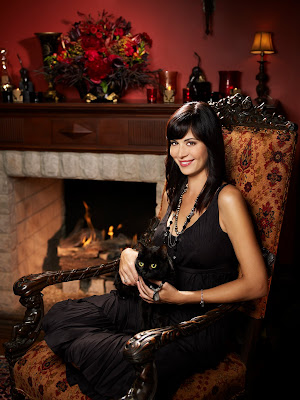 AMC - Hell On Wheels Season 2 - spun its wheels (ha!) mid-season but really picked up steam at the conclusion. Felt like a series finale. The Walking Dead Season 3 was much improved this year. And Breaking Bad was superbly dark.

For whatever reason ended up watching a lot of this, for the first time ever: running, weightlifting, even some skeet shooting. All the American hype got me to enjoy female gymnastics (the rhythmic portion was actually my favorite - no U.S. team there), but the swimming bored me. Opening and closing ceremonies were artful spectacles with a lot of good music. But perhaps the best thing to come out of it was this internet meme.

Also watched the SF Giants win the World Series. That was fun.

The 12th Annual SF Sketchfest is coming up in January and I have tickets for 23 different shows over 3 weeks. Some three a day. I consider it a vacation of sorts in my home city. No Spanglers or Jen Kirkman this year, but plenty of other delights. Had a Sophie's Choice to make between Jimmy Pardo and Doug Benson for one date…

Comedy Central have aired a slew of quality new hour specials from comics I admire: Amy Schumer, Demetri Martin, Kyle Kinane, Gary Gulman, and Eugene Mirman. Paul F. Tompkins had a great release with Laboring Under Delusions of which the DVD has extra material and a commentary by PFT in character as legendary director/producer Garry Marshall.

6/15 Eddie Pepitone: The Bitter Buddha - great doc about a great comic only now getting his due (thanks Capone)

8/04 Comedian (2002) Netflix DVD - Great doc about Jerry Seinfeld's return to standup, contrasted with a cocky up-and-comer who is driven but less talented. Many fun bonus features on the DVD. The soundtrack features a bunch of great jazz, rock, and R&B. Some fan made a YouTube playlist that is worth a listen.

11/04 Punching the Clown (2009, Henry Phillips in a self-made film about the struggles of a standup comedian) Netflix
11/07 Todd Glass has a new one out, a Netflix streaming exclusive.
11/30 Maria Bamford's Special Special Special @ Chill.com (filmed before an audience of just her parents. Amazing)

SCTV re-watched all 5 of the DVD sets. Still holds up - prefer them to SNL from the same period (early 80's). Enhanced by a lot of useful info gleaned from SCTV Guide. Official channel

Been watching the Dr. Katz, Professional Therapist show (1995-2002) which I'd never seen the whole run of. Great stuff but after about 3 of them at a time I get sleepy. A clip from when cartoon Louis CK still had hair…

Sometime in April I re-watched the first four Batman and first six Star Trek movies (some with Rifftrax accompaniment) and realized the Tim Burton Batflix are better than I remembered. And that the Trek films were never very good, esp. compared to the original TV series.

also, Something From Nothing: The Art of Rap
Directed by Ice-T, with some nice aerial photography of NYC, Detroit, and L.A., and lots of great raps and knowledge dropped. Intimate interviews and, despite the high-powered guests, not at all corporate. Loads of of beloved artists were omitted, but I loved it nonetheless. Favorites
That is, films that evoked in me a particularly strong aesthetic or emotional reaction:
Holy Motors, A Royal Affair, Chasing Ice, Fat Kid Rules The World, The Perks of Being a Wallflower, Starlet, Dredd 3D, The Master, Farewell My Queen, Magic Mike, Moonrise Kingdom, Prometheus 3D, Beasts of the Southern Wild.

Comedies (with both "dram" and "rom" qualities) I liked a lot were:
Ted, This is 40, The Five Year Engagement, For A Good Time Call, Your Sister's Sister, Safety Not Guaranteed, Pitch Perfect.

Just got the new Big Boi - it's a good one.
New to me this year: Alabama Shakes, Little Dragon, Santigold, The Sheepdogs, Sleeper Agent, Talib Kweli (who I always thought of as merely Mos Def's sidekick but turns out has a lot of great albums of his own). My favorite song of the year:

Some new ones and discoveries have been Call Chelsea Peretti, a silly, sarcastic call-in show with a comedienne I love, and Tolkien Professor, whose Riddles In the Dark and Hobbit lecture series helped me re-discover the wonder of that book, and prepared me for the inevitable differences in the film adaptation. Stopped listening to film review shows entirely, but do like Filmspotting SVU (Streaming Video Unit) from the hosts of the now defunct IFC News podcast. Also, more comedy with Pete Holmes' You Made It Weird, The Dana Gould Hour, and The Long Shot Podcast (now in it's sixth season).

After having some dramatic overages on my data plan, I reset my iPhone, deleting all my apps. Found a new podcast streaming app called Instacast that I love. Still using iTunes for some shows, but this way I'm not collecting mp3 files that I only listen to once, and can get new episodes without syncing to my Mac.

The boys were busy this year with more video on demand riffs of obscure schlock than ever before, augmented by a handful of live broadcasts and current movie riffs:

The Curse of Bigfoot / Mutant / Prisoners of the Lost Universe / Brainiac (1963) / Bloody Pit Of Horror / RT Presents: Flatliners (w/ Cole Stratton & Janet Varney) / Future Force / Neutron the Atomic Superman vs. the Death Robots /
Live: "MANOS" THE HANDS OF FATE - Fathom event (new riffs of an old MST3K favorite now in in restored print. Still a baffling mess, it's more of a "worst movie ever" than any by Ed Wood) /
The Hunger Games / The Guy From Harlem / The Bermuda Triangle / The Revenge of Dr. X /
Live: BIRDEMIC - Fathom event (a great riff of a new bad movie classic, but a poor audio mix marred my enjoyment) /
Tourist Trap / Nightmare At Noon / Future Zone / Christmas with RiffTrax: Santa's Village of Madness

Took two trips this year, one to Chicago in the spring and another at Thanksgiving to Maryland. Both good times but marred but foot/leg pains that crippled me for a day each time. 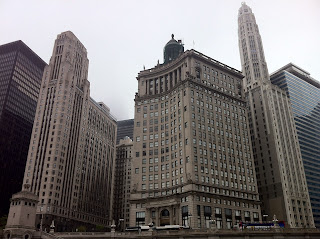 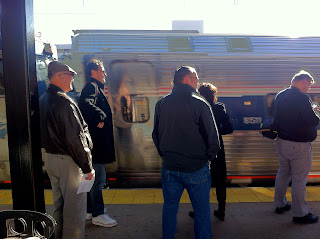 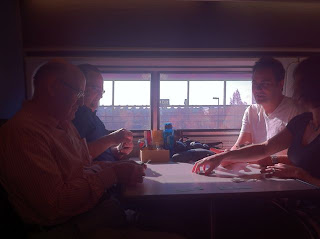 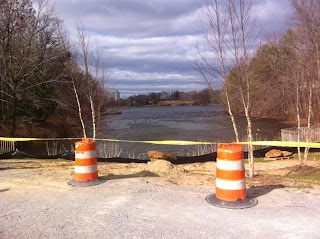 12/22 Had a nice pre Xmas pork loin dinner with Rob, Nancy, & brother Paul. Fish house punch was consumed, gifts were exchanged, laughs were had. I was mega late because electrician Mike Umble graciously replaced an outdoor light, outlet and indoor switch for my home. 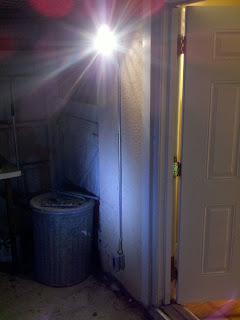 And it's true what they say about asparagus pee…

Posted by Finnias Jones at 7:50 PM