Comedy
The 12th Annual S.F. SKETCHFEST was held January 24 - February 10, 2013 and I attended 23 shows in 18 days (still only a fraction of the over 100 available). My recaps are posted over at the AST message board in this thread and feature many photos. I was more aggressive than before in getting snaps and meeting performers. And I think my attempts at capturing comedic moments in writing have improved as well.

Doug Stanhope - told not so much jokes as rambling stories. Sounded completely off the cuff but I know there was prepared material. Each subject blended into the next: cancer update (he still don't got it despite his dissolute lifestyle), the late Chris Dorner (Doug is pissed that his name wasn't mentioned in the murderer's manifesto), drinking, attempting to enjoy the porno "Backdoor to Chyna," meeting Jake LaMotta, assisting his mother's suicide (true), how the Occupy Movement was worthless, cancer charities, and culminating in his on-the-playing-field rape of a football player. He was gruff, increasingly drunk (as the audience sent him shots throughout), but high-spirited and very intelligent. Hilarious. Cobb's was sold out, the balcony open - more folks on a Wednesday night than any of the Sketchfest shows I attended here on weekend nights.

Devices
Nicest looking and most spacious sounding headphones I've ever owned - Sennheiser HD 598. Ordered them from Crutchfield who have a lot of nice stuff and excellent customer support.

1/29 MacBook Pro to Apple Store. My trackpad crapped out after my 3-year warranty expired. The problem had been slight for the past few months but then went nuts, the cursor jumping and jittering on the screen. Could still type and select but with high risk and major hassle. Swollen battery was the culprit. Still, only $220 to replace both.

2/1 After a month a problems with some channels on our cable service, dozens of phone calls to Customer Support, missed appointments, and one unsuccessful technician visit who misdiagnosed the cause, Comcast finally replaced the actual coaxial wire connecting the house to the pole. No problems since.

2/20 Our Rheem Gas Furnace Heater (from the 80's) has gotten a big workout this colder than usual winter. It too has crapped out and I've struggled to understand how it's supposed to work. Taking it as a challenge, I have gotten it running again by installing a new Hot Surface Ignition Module, but still need an expert to fine tune it. Found a lot of useful advice in YouTube videos made by HVAC professionals. I now know more about gas furnaces than I ever thought I would. This guy's channel is one of the best…

Movies & TV
1/26 There Will Be Blood (2007) with audio commentary via "You Made It Movies" with comedians Pete Holmes & Paul F. Tompkins. This is Pete's favorite film and Paul appears briefly in it so this was a great excuse to watch this masterful film again while listening to two brilliant and knowledgeable fans talk over it. Inspired to me to see P.T. Anderson's latest again while still in theaters…

1/29 The Master @ Stonestown (2nd time) — serendipitous as it was playing at the mall where the Apple Store is located (see: Products, below). Loved this the first time, but admittedly baffled by some of it. This time was smooth sailing as I better grasped the themes and relaxed in its languid atmosphere. A visceral heady film, a romance between the two sides of man.

2/16 Breaking Away (1979) @ VOD
Comedians Jimmy Pardo and the Sklar Brothers frequently name this as one of the greatest sports movies ever. It is charming, uplifting fun, not at all the gung-ho jockfest I'd imagined. More an intimate portrait of class struggle in small town America (really!), bicycle riding is just the vehicle (ugh) used to tell the story.

2/23 History of the Eagles @ Showtime  (3 hour documentary) — thorough, informative, at times moving (especially when sidemen are forced to quit the group). The lead guitar parts have fascinated me for years so I was glad to get some clarification on when Leadon, Felder, and Walsh were all in the group. Many high quality 70's era film clips in which figureheads Frey and Henley appear as humble geniuses, but self-important douches nowadays. Joe Walsh is damaged but glad to be alive. I dig a lot of their tunes, but recall trauma from The Long Run playing during a game of "truth or dare" at a birthday party of a gal I crushed on in 1980. Never forgave the Eagles for that.

2/24 The Sessions @ VOD — Outstanding tearjerker, sexy, funny, and touching. Leads John Hawkes & Helen Hunt won Indie Spirit awards for acting the night before, which finally convinced me to see it. The trailers left me feeling manipulated by an over-celebratory indie rock soundtrack, but I was mistaken. None of that music appeared in the film itself which was more quietly dignified in its triumphs.

The Oscars (ABC) - had a good time with this as some of my favorites won (Django Unchained) but more did not (*boo* Hathaway - Hunt eared it with greater subtlety and way more screen time). Despite what mostly felt like a modern streamlined show, it was still bogged down with a misguided throwback tribute to recent film musicals that was as terrible as anything I've ever seen. And the whole thing still managed to run a half hour long. Strange.

This series of videos http://www.fandor.com/blog/oscar-2013-who-really-deserves-to-win helped put the nominations in focus, solidifying why certain wins felt right and others wrong. For instance, in acting lead and supporting, both Phoenix and Hoffman from The Master were outstanding, but since the film itself was not publicly embraced, it was unlikely either would get the trophy. They also make a strong case for Silver Linings Playbook deserving the Best Motion Picture award as it is the most relevant to modern life.

2/25 Warm Bodies / Side Effects @ Century Daly City 20
First an enjoyable "zom-com," Romeo & Juliet meet Sean of the Dead. Then the latest from retiring (?) director Steven Soderberg, a tawdry exposé of big pharma and insider trading via Hitchcock with a touch of Basic Instinct. Engrossing and twisty, found myself enjoying Jude Law more than ever (Contagion, Anna Karenina) and loving the heck out of the loony performance by Rooney Mara (Social Network, the U.S. Girl w/ Dragon Tattoo).

3/01
Happiness (1998) Netflix DVD (no extras) — enjoyed it. Clever interweaving storytelling, sad, funny, and gross. Can't say I'm a Todd Solondz fan. Must have seen Welcome to the Dollhouse back in the day, disliked it, and ignored him since, but this was a really good "feel-bad" movie. Manages to create empathy for unlikeable characters and to find humor in horrible situations. 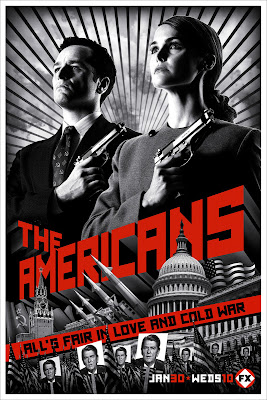 The Americans @ FXHD —  Been hearing good things about this new spy show set in the cold war 1980's so I took advantage of the Friday night marathon running after Taken and caught up on the first five episodes. Excellent cast, conflicted characters, bursts of violent action, occasionally seedy and frequently suspenseful. Occasionally takes advantage of the historical setting to make commentary on current events. Sort of a "Homeland Babies," in that we see both sides of the struggle, sympathize with our morally dubious heroes, but with fewer histrionics than that show. Highly recommended.

3/02
56 Up @ Opera Plaza
No @ Embarcadero
Archival video overload. Two foreign flicks, one a doc, one than feels like a doc but isn't (technically). Both terrific.

1/25 McBain — a terrible, terrible Rambo/A-Team mashup starring a sleepwalking Christopher Walken that no one should remember.
3/02 When A Stranger Calls Back — horror film that is not very scary but is unsettling in its treatment of the lead actress, not violent but embarassing emotional torture, lightened up by the wisecracking of the Mike, Kevin, & Bill.

Posted by Finnias Jones at 5:19 PM