Good news, over half of these have been officially released on DVD. Bad news, they're mostly from the weaker, front half of the season. If you're new to the show I wouldn't try one with less than a 3 star rating. Project Moon Base is your best bet. 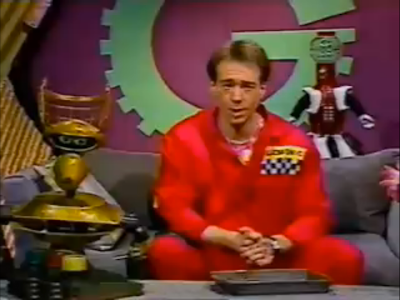 
Stars Episode # - movie title
2 101- THE CRAWLING EYE +
1 102- THE ROBOT VS. THE AZTEC MUMMY *+
1 103- MAD MONSTER *+
3 104- WOMEN OF THE PREHISTORIC PLANET #
2 105- THE CORPSE VANISHES *+
3 106- THE CRAWLING HAND +
3 107- ROBOT MONSTER *+
3 108- THE SLIME PEOPLE *
4 109- PROJECT MOON BASE *+ (available March 2011)
4 110- ROBOT HOLOCAUST *
4 111- MOON ZERO TWO
5 112- UNTAMED YOUTH
4 113- THE BLACK SCORPION
+ Available on DVD or Netflix streaming
* There were also 9 parts of the serial Radar Men From The Moon (Commando Cody) featured in front of these movies
# Production number only: s/b end of season, i.e. #114. OOP on DVD
After a grading a few episodes I realized that I'm still "grading on a curve", i.e. giving higher marks than I probably should. But it's hard for me to keep all eleven seasons of this show in mind, especially as it changed so much over time. Maybe after I've rated all the seasons, I'll have more perspective, and some of these rankings will go down.
During KTMA/Season 0, I was being generous, as they are so obviously rough-drafts for the future series. In my thinking, since I can't vote for "zero" stars,  a "1" is lowest and should be reserved for episodes I hate. But I didn't really hate any of these, so in most cases an original 2 star rating has been reduced to a 1, which means I endured it but am not clamoring to re-watch it anytime soon.
Still, if a movie was fun to watch, that in itself earned points from me, even if the riffing or host segments were sub-par. So these results may differ slightly from what I posted in my original comments over at the Satellite News Episode Guide; some are lower, others higher.
An illustrated history of the show at Tom's Temple of MST3K Stuff
http://www.mst3ktemple.com/season1.html


Below: from 104 – one of the best host segments of the season. Also the first (and last) song(s) to appear on the show. Later seasons will feature many more…
Posted by Finnias Jones at 3:10 PM