Had a nice visit over Christmas with family (mostly in-laws). Saturday saw the Masters of Venice exhibit at the de Young, ate at Park Chow, attempted to see Playland @ the Conservatory (but it was closed early), then took a nice walk around Land's End to see the ruins of the Sutro Baths and some lovely views of the bay. 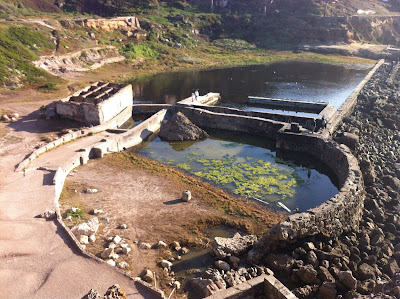 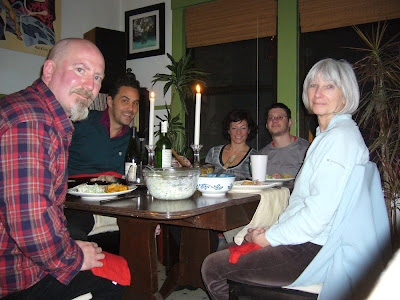 Sunday featured opening gifts, a terrific dinner prepared by Nancy and her mother, much drinking and talk about movies (for Anna - here Nathan Rabin argues that Joe Versus The Volcano is a "Secret Success"). We then managed to watch three films:

Sunshine Cleaning (Netflix DVD - good, light fun considering the grim premise + it confirms my crush on Amy Adams)
The Hangover, Part 2 (Comcast On Demand - as David Bax from BP said, "Probably a better movie than the first one, but they forgot to make it funny.")

Indiana Jones & The Temple of Doom (DVD - much better than I remembered it. But then, for me, Raiders of the Lost Ark is a perfect film, so any sequels seem less - more on this later…).

I also caught a few comedy specials online and TV:

Young Adult  (12/10 @  Metreon)
Charlize Theron gives a dynamic performance as as unlikable woman yearning for her glory days in high school. Comedian Patton Oswalt plays a lovable loser making the best out of a bad situation. The latest film from director Jason Reitman (Up In The Air) and writer Diablo Cody (Juno) is a touching comedy/drama about grown-ups who still have some growing up to do.

Shame (12/11 @ Embarcadero)
Michael Fassbender (man-crush) stars in this adult film (NC-17) meant for adults. I've never seen a film with this much sex and nudity that was also such a buzz-kill. But it's a work of art that made me somewhat nostalgic for late nights in Manhattan.

The Artist (12/18 @ Embarcadero)
Capone did a great interview with the director who reveals this was not the film's original title. Makes sense, as the "artist" in question is actually an "actor," but the current name fits, telling the story of how creative people must adapt to changing trends in their field. Perhaps even more than this year's My Week With Marilyn and Hugo, it gives a insightful look into what goes on behind the camera to create "movie magic." And yes, it's a "silent movie" (i.e., no dialogue) but it does have a score (and in two surreal scenes, a soundtrack).

Mission: Impossible - Ghost Protocol IMAX (12/26 @ Metreon)
First off: too much punctuation in that title. But I liked it a lot. Action movie of the year, narrowly beating out Fast Five. I am a Tom Cruise hater, so I never saw the first three, but may now visit them. Pixar director Brad Bird (The Incredibles, Ratatouille, Iron Giant) did a fine job, again featuring his fascination with machines and gears in motion.

And a discussion between two critics about why one didn't like Scorsese's 3D film Hugo
http://www.avclub.com/articles/hugo,67044/

I'm afraid I'll end up on the wrong side of history, but here's my own take on the hype, which I posted in the comments over at Battleship Pretension:

BP episode #249 12/27
"…I am with Tyler on not loving Hugo (and I saw it in 3D opening week). I'd rate it very good, not great, and am baffled by the nearly universal praise it is receiving on so many critics best of the year lists. I am tempted to say "the emperor has no clothes," but won't go that far - I did enjoy the film, I just find the recent spate of Scorsese efforts to be exercises in style rather than satisfying works of art. Tasha Robinson at the A.V. Club is one of the few vocal dissenters, labeling it a "gimcrack" (look it up).

Not seeing it in 3D likely reveals its flimsy story. What begins with the promise of an inspirational child's fable devolves into a lecture on the importance of film preservation, reducing our protagonist to a passive observer. The central mystery of the automaton was not explored fully enough for me. Beyond its spectacular mise-en-scène and immersive 3D (which was gorgeous) I found the whole thing to be bit precious and ultimately hollow. Kind of like Avatar…"

Ben & Jerry's Limited Batch "Schweddy Balls" ice cream
It only appeared once at my local 7-11 and it is delicious.

While being forced to hear crap dance-pop radio at work for a few weeks this summer, I developed Stockholm Syndrome and started to appreciate the latest hits from divas such as Katy Perry, Lady Gaga, Nicki Minaj, and the like. One song I heard a lot was "Like A G6" (by Far East Movement) which features a sample from this song by Dev which I find kind of hypnotic.

More songs I learned to love: Adele Rolling in the Deep, Rihanna What's My Name, Avril Lavigne What the Hell, Britney Spears Till the World Ends, J. Lo On the Floor , and of course LMFAO Party Rock Anthem.

Hell On Wheels (AMC)
It's not trying to be Deadwood, though at first I thought it was. It's got the same look, but not the high level of writing. Luckily it's tackling a different set of issues: railroad, racism, immigrants, natives, religion, prostitution (OK, so it's not completely different). It was a ballsy move to kill off two of its most promising characters (the grizzled foreman - played by Ted Levine - and the sickly surveyor) in the very first episode. Kind of a dumb show, but it's a much less frustrating watch than The Walking Dead came to be. Enjoying the muddy Old West setting and the trains.

An aside: One episode dealing with slavery got me wondering if anyone had ever made a movie about controversial abolitionist John Brown? Turns out he has been portrayed on film and TV, but not in any epic biopic like the one I imagine could be made.

While visiting the U.K. in 1981 as a teen I bought Encyclopedia Metallica: The Bible of Heavy Metal (OOP), published during the heyday of the NWOBHM. My copy is filled with passages highlighted with yellow marker as I devoured it's contents multiple times. In four hours (of 11 total) host Sam Dunn has already covered the contents of that book.

Episodes seem way too short considering all the available material, but they are doing a good job cataloging the multi-headed hydra that is Metal. The first few shows covered territory familiar to me, so I can nitpick the omission of bands like Budgie, Blue Oyster Cult, Thin Lizzy, Montrose, and Angel Witch, but can forgive them ignoring B-level bands that I've only come to appreciate as I got older. Curious to see how they handle later 80's trends like hair metal ("nerf metal" as Chuck Eddy labelled it) and thrash.

Kind of fitting that I started this year with a post about Mr Plinkett's SW3: Sith review, as he just released his latest takedown of  IJ4-Crystal Skull, making the argument that the latest entry (and hopefully last) betrays everything that made the series so successful. This got me wanting to re-see the second film Temple of Doom which I did Christmas Day with my brother and bro-in-law. It was pretty great, though the parts I remembered best, the mineshaft chase and subsequent brawl on the conveyer belt, now seemed to be the stiffest parts. They feel unnaturally set-bound and reliant on machinery and contraptions for the gags to work. But the rest of the film is a potent blend of old-fashioned action, humor, and the supernatural. Have not seen the two current Spielberg films and am not in a rush to just yet.

Posted by Finnias Jones at 6:34 PM