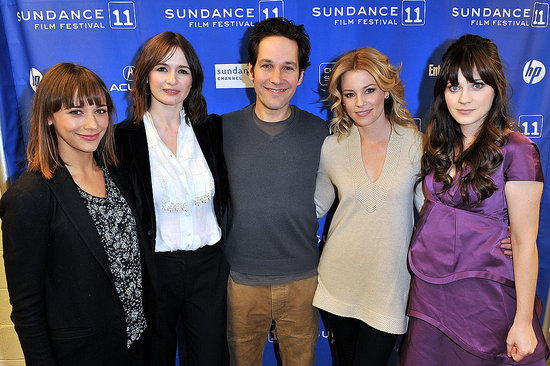 Our Idiot Brother is a comedy I've been looking forward to since Sundance in January (when it was called MY Idiot…), mainly because of it's great cast (Paul Rudd, Zooey Deschanel, Elizabeth Banks, Rashida Jones, Emily Mortimer, Steve Coogan) and potentially amusing premise: naive down-on-his-luck dude moves to the city seeking help from his family, awkwardness ensues, and everyone's life ends up being improved. Sounds pretty corny when put like that, but what makes Brother watchable is the charm of the performers, particularly Rudd's Ned, who I've I always liked (Anchorman, I Love You Man) and is so sweet and good-hearted here it's almost painful.

The seriousness of some of the events (incarceration, infidelity, accidental pregnancy, child-rearing, unethical journalism) made it at times more of a dramedy, so the laughs were not as frequent as I expected. But there is funny to be found: T.J. Miller kind of stole the show as a helpful hippy who shows up a few times throughout the story.

And Ned's horsing-around with his young nephew re-enacting fight scenes from Pink Panther movies was both silly and touching, and helped to establish a familial connection. In fact the main gripe I have is that his three sisters (who each have their own distinct set of personal issues that Ned manages to complicate) never seem like a real family that grew up together. It's like this brother of their's is a stranger not raised in the same household, neither sharing the same values nor memories. Some time is spent at the mothers house, but I don't recall a father ever being mentioned. So a bit more back-story might have helped me believe this group as a family unit.

Likable cast, sweet story, but a bit hokey, and not quite as funny as I'd hoped.

Speaking of attractive casts, that was the main reason I decided to see Shark Night 3D. Sara Paxton (who I last saw get raped nearly to death in that Last House On The Left remake a few years ago) and Katherine McPhee (stunning on American Idol many seasons ago and was also in the Anna Faris vehicle The House Bunny) strutting around in bikinis along with some bland 90120-looking shirtless dudes there to protect them. (Note: that was supposed to be a joke but lead "nerd-hunk" - is that a thing now? - Dustin Milligan was indeed a regular cast member on the rebooted 90120) 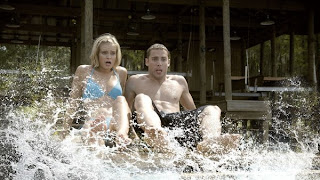 Second reason was that it was shot in 3D, not post-converted. The high-speed boating and underwater sequences were stunning, with streams of tiny bubbles and bits of debris floating about that was truly immersive (submersive?). But with seemingly all the sharks being CGI creations (and there is a wide selection of shark species on display here, making it unlike most sea-creature attack movies) they generally lacked weight and real menace. There were a few jump scares (literally, twice, a shark jumped out of the water to munch on some pretty boy) but little gore. I guess to get it's PG-13 rating the filmmakers were selective about their bloody moments. There are a number of deaths we are never graphically shown.

Which actually leads me to the big twist of the film: Turns out these sharks were put into this salt water lake by a couple of rednecks in order to make snuff films of real shark attacks. One of them explains it this way (and I'm paraphrasing):
"What's been the longest running annual event on cable TV? Shark Week. We're here to serve the hardcore fans who want to see the real thing."

So that's a pretty nutty idea that's introduced about 2/3rds through the movie. There's something "meta" about making a shark attack movie that condemns folks who just want to watch the carnage. And a bit of an insult to the audience to then not deliver the goods (at least not in the way last year's blood and boob filled Piranha 3D did - a film I must confess I missed in theaters, and can't bear the thought of seeing in measly 2 dimensions. In fact my regret at not seeing it is probably what most enticed me to see this one). Maybe director David R. Ellis was going for a more family-friendly version of Piranha. There was no equivalent here to Gianna Michaels' topless water-skiing or Kelly Brook and friend doing nude underwater ballet. Nor a dismembered "member" floating on the screen.

Shark Night does an effective enough job of setting up some 2-dimensional characters and putting them in a picaresque yet isolated location (stuck on an private island without phone service). It then manages to find ways to force them all back onto the water, allowing each of the seven kids to die (or nearly get eaten) in their own distinct ways. But the movie starts losing steam once the real villains are revealed and proceed to explain their motivations: revenge, greed, sadism, etc. Unfortunately the more time we spend with the human bad-guys, the less fun this shark story becomes.

Still, some good moments underwater, and leads Milligan and Paxton were both likable (him for his character, strong yet shy, and her for being both  brave and vulnerable… and for that blue bathing suit).


ETA: Best part was probably the goofy post-credit rap by the cast. Odd coincidence: in these two films I got to see both Zooey D. and Katherine McP sitting on toilets. Now I can scratch those fantasies off my bucket list.
Posted by Finnias Jones at 1:20 PM