"I can't do this anymore"

No, not this blog, though I've been a neglectful parent here. Hope to correct that this week. But both of today's movies feature an exasperated member of a couple uttering this phrase during an argument. Mere coincidence?
Another double feature with related subject matter. This time, married couples in crisis. Both have a child, but are in very different places. And curiously, both movies give some producer credit to their stars, suggesting they were passion projects for the lead actors. And fair warning, I cried my eyes out during both these films. 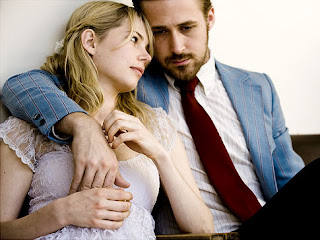 Blue Valentine (2010)
Outstanding. Moody and elegiac, simultaneously telling the story of a love affair's genesis and eventual decline. By starting us near the end, then intercutting with flashbacks to when this couple (Michelle Williams & Ryan Gosling) first met six years previous, we are shown how love can fade after time. The greatest thing about it was that in both timelines, I could empathize with each character and how they feel about each other. Some might think Gosling is portrayed as too much of a redneck loser in the latter half of the movie, but I felt his anguish. He has defined himself as a husband and father, with no greater aspirations in life. But Williams wants more, for herself, and for her husband. She thinks the world of him but is disappointed by his lack of ambition. Neither comes off as a villain.

We are shown how in the past it was his greatest ambition to just be with her, and to be a father to her child. He is totally romantic and perfectly charming in the flashbacks, then utterly clueless in the present scenes, when Williams is obviously distressed by their current state. Their desperate attempt to rekindle their romance in a window-less "future" themed honeymoon hotel suite is a masterful fusion of setting, cinematography, and performance. I can't think of many films that so perfectly capture the petty arguments that a long-time couple have, where perceived hidden-meanings and a poor choice of words become the main sticking points, preventing any real communication. The mostly guitar-based score by Grizzly Bear was great, along with a few numbers by Gosling on ukelele. I loved this movie. Haunting.


ETA: Alison Wilmore @ IFC interviewed the director and stars of BV. She also reviewed it and ranked it #3 on her Best Films of 2010 list. 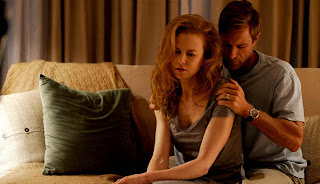 Rabbit Hole (2010)
Also moving and haunting, literally, as it shows a couple 8 months after the death of their son from a car accident that took place in front of their house. We are gradually told the details as the movie unfolds. For instance, after first meeting a dog at a relatives house, we learn that dog once belonged to the couple, then later that their child was killed while chasing the dog out into the street. We later meet the high school senior who was driving the car that killed the child, and how he too is haunted by the incident and has developed his own unique method of dealing with it. This was based on a stage play and at times feel like it, as it is character-based piece with a handful of locations. It surprised me by how funny it was at times. Mostly serious, but often silly as the couple (Aaron Eckhart & Nicole Kidman) each clumsily try to cope with their loss by developing new secret relationships with other people that eventually bring them closer together and towards healing. Credit to director John Cameron Mitchell for finding a way to tell this story in an uplifting way.

Posted by Finnias Jones at 7:05 PM